SOMETIMES IT'S JUST A GUY DROPPING A HOT DOG:

Posted by overtherye at 11:03 No comments: "She speaks to you through me and I have to tell you right now -- I didn't plan to talk about this -- right now I feel her. I feel her presence. She's inside me, and she's talking to you." – John Edwards, Plaintiffs Attorney, Campbell v. Pitt Memorial Hospital.

This presumably is the quote Ann Coulter was referencing this past weekend when she called Sen. John Edwards a “faggot.”

I will grant you this, Ms. Coulter – It does sound pretty gay, and Sen. Edwards does indeed have hair with voluminous body that shines.

BUT QUIT PICKING ON GUYS THAT TALK PRETTIER AND LOOK PRETTIER THAN YOU!

First and foremost, it must be understood that Sen. John Edwards began his career as a trial lawyer. Anyone who has ever witnessed a trial as a juror or otherwise has probably noticed the prominently placed portrait of Raymond Burr, which you will find hanging in every proper courtroom across this nation. Most of you may also know that Raymond Burr practiced under the alias Perry Mason.

Raymond Burr was gay. Perry Mason was not. Now, you can begin to see how such a confusing contradiction presented by the nation’s foremost legal mind might have had a very impressionable effect on the young John Edwards as a student of pretty talking and law.

The pretty hair can only be explained as a correlation to his success as a trial lawyer. The more money you make – the more expensive the shampoo and cream rinses you can afford. It’s a simple equation, really.

The truly inexplicable variable in this whole mess is Ann Coulter herself. Why so angry, dear? Perhaps if we can tap into your inner-child we can begin to help you face the hatred, disappointment, and missed opportunities that have brought you to this deep, dark place. Wait – I’m hearing something. It’s you as a young girl -- she’s speaking…"She speaks to you through me and I have to tell you right now -- I didn't plan to talk about this -- right now I feel her. I feel her presence. She's inside me, and she's talking to you." 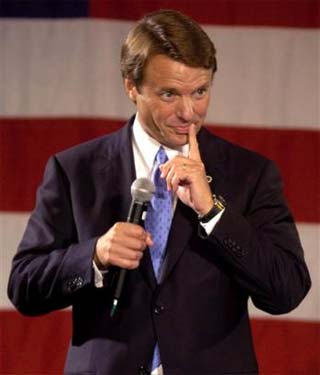 Posted by overtherye at 23:08 No comments:

I bet you didn’t know how much fun you would have when you visited. I bet that many of you didn’t even know you were visiting or how you got here. I even bet that perhaps I am delusional in thinking that you [dear reader] have any inclination to care for, interpret, laugh amongst yourselves and families, or discuss what I have to expound here on or about your respective and/or proverbial water coolers. “No matter,” says I. You will have fun, and that is why you are here of course, dear reader.

AND NOW TO THE SUBJECT OF WATER (into magic wine) COOLERS:

It is widely known that the French have no God - save for Jerry Lewis. Move over Perrier! Now we TRUE AMERICANS can have our Freedom Fries with Holy Drinking Water distilled in the pure waters of Heaven. This unique outfit in Heaven (or rather, Stockton, CA) has decided it's time we show our true colors and confirm what the rest of the world seems to think of America -- that is we truly are "Holier than Thou." On a side note, Heaven/Stockton seems to have a problem in its Admissions Department as in 2006 it ranked #8 in the U.S. for cities with the worst crime rate. St. Peter - You're fired! I guess Jesus will have a lot of work to do filling sinners' mouths with his "intense heat".

Visit the Holy Drinking Water website to purchase a case for someone who needs saving in France today!: http://www.holydrinkingwater.info/

This warning appears on the label: "Warning to sinners: If you are a sinner or evil in nature, this product may cause burning, intense heat, sweating, skin irritations, rashes, itchiness, vomiting, bloodshot and watery eyes, pale skin color, and oral irritations."

And, so I'm left to conclude that these "adverse" effects are simply Jesus turning water to wine by making magic in my mouth!

A recent autopsy by the famed Forensic Scientist and Mens' Fashion Designer, Dr. Bill Bass, has revealed that, in fact, the Big Bopper did not die of a gunshot wound (as roughly ten people in the world might have you believe). "Surprisingly," he concluded, "Mr. Bopper died in 1959 shortly before the infamous plane crash that killed himself as well as musicians Buddy Holly and Ritchie Valens when Mr. Valens 'shanked' Mr. Bopper with a switchblade for continuously sneaking up on him and shouting 'Hello Baby!' Mr. Holly and Mr. Valens died while attempting to use what Mr. Holly believed to be the onboard flux-capacitor to fly the plane into the future [1971] and ask Don McLean to write a much abridged version of the song The Day the Music Died (American Pie). Since the flux-capacitor was not invented unitl 1985, Mr. Holly instead had flipped the ignition swtich to the off position."

Note: The surviving families of Mr. Holly and Valens have filed a wrognfull death suit in a Los Angeles civil court against actor Christopher Lloyd for his alleged involvement in their deaths.

I'll be back soon to explain why you're here.

Posted by overtherye at 21:13 No comments: